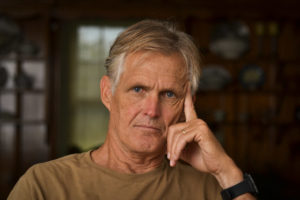 Roy Harrell literally grew up in the church as a pastor’s kid in eastern North Carolina.  But as is often the case with such children, by the time he had attended a couple of years of Bible college, he was no longer living for the Lord.  Like the prodigal son of Jesus’ parable, Roy left college and went into a period of spiritual decline that lasted a number of years, ending up in Southern California. But God providentially brought circumstances to bear which eventually resulted in Roy “coming to his senses” and finding reconciliation with God.

After a short career as a manager in the hospitality industry, Roy began an antiques business which he ran for a number of years.  But all the time God was providentially using circumstances to bring him to accept a call to the ministry.  Eventually, that resulted in moving to Bethany Beach, Delaware where Roy began a ministry at the beach targeting the surf community.  After a few years, God revealed a bigger picture, that of starting a church that would be directed towards reaching the seasonal influx of summer visitors and the local, year around beach community as well.  That has resulted in a unique church that meets on the beach during the warmer months and moves indoors during the colder part of the year at rented quarters in the town of Bethany Beach.

2 Timothy 4:2 has been a verse that Roy believes God has used to commission this unique church for this particular place. “Preach the word; be instant in season, out of season; reprove, rebuke, exhort with all longsuffering and doctrine.” That commission has become his inspiration for the expositional preaching of God’s word, which Roy believes is the essential component to building and equipping God’s church.  Roy Harrell started the Beach Fellowship in 2006, and serves as the pastor.  He and his wife Susan have three children.